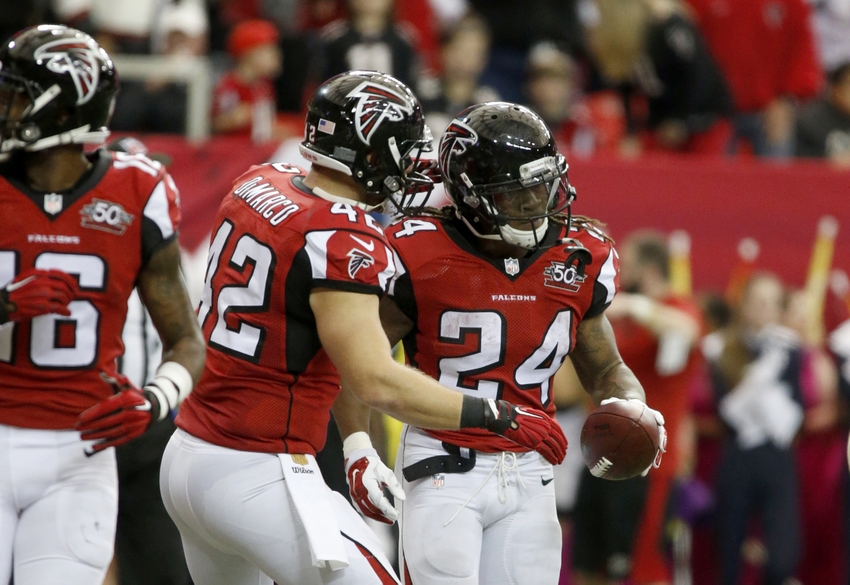 Jan 3, 2016; Atlanta, GA, USA; Atlanta Falcons running back Devonta Freeman (24) celebrates his touchdown reception with fullback Patrick DiMarco (42) in the second quarter against the New Orleans Saints at the Georgia Dome. Mandatory Credit: Jason Getz-USA TODAY Sports
Honestly, this is probably going to be the worst Monday Night game we have to endure all year. The Saints were bottom-feeders for all of 2015 and Atlanta took a serious nosedive after week 6. While the Saints addressed some of their defensive woes in the draft this spring, Atlanta chose to get more athletic — this matchup will give us the early indication on who made the right choice.

Protect the football. The less time that Drew Brees has the football, the fewer points New Orleans can put on the board. Atlanta has a decent running game, a solid QB in Matt Ryan and the one and only Julio Jones out wide. If they can generate a healthy mix of handing it off and throwing it to Julio without giving Brees extra possessions, this will be an easy victory for them.

Ground and pound, then air it out. Look, they’re not going to stop Julio Jones, but Atlanta’s bad defense can help the Saints keep pace. Mark Ingram is going to be a valuable weapon in the run game and if he can force Atlanta to put eight men in the box, Drew Brees will have plenty of opportunity to pick apart the secondary. Ingram has to get it started for them though, or else Atlanta will drop too many guys into coverage for even Brees to beat consistently.